Cynt Marshall has climbed many mountains in the corporate world, shattering glass ceilings and building a unique brand of cultural transformation. She is also a passionate and exuberant follower of Jesus Christ.

“Ain’t No Mountain High Enough,” are lyrics she often sings. “I know that song isn’t originally about God,” she laughs. “But I like to think about how there’s literally nothing that will come at me that God can’t handle.”

For 36 years, Cynt worked for AT&T, based in Dallas, Texas, retiring in May 2017 as the Vice President of Human Resources and Chief Diversity Officer of the multi-billion dollar global telecommunications giant. But she still receives direction on her knees.

“I had retired, and we were getting ready to move to North Carolina and even had found a house,” she says. “I was praying one day, and the Lord moved in my spirit that it was not time to move, and that it was not his direction; I was moving out on my own. I went to go tell my husband, Kenneth, who normally goes with the flow, but before I could talk to him, he started sharing with me that he thought we should stay in Dallas. Here I was approaching him to tell him that the Lord told me, ‘don’t move’, and he beat me to it.”

The Marshalls had no idea why God was telling them to stay put, but listening and following Jesus is normal for their family. “What I truly know is there is a God who sits high and looks low, and I am in the palm of His hand. I am surrounded by Him, and my steps are ordered by Him, not me,” says Cynt.


Cynt is determined to make a difference and transform the culture, not just of NBA teams, but of the culture at large.

Only days after the Lord specifically told the Marshalls to stay in Dallas, the phone rang. It was Mark Cuban, the bold and slightly eccentric owner of the National Basketball Association’s Dallas Mavericks. Cuban was facing a crisis of monstrous proportions as scathing allegations of sexual harassment and misconduct in the Mavericks workplace emerged, the latest in a swarm of sexual harassment scandals swirling in corporate America. Within hours, Cynt was sitting in Cuban’s office, and he offered her the job of Interim Chief Executive Officer.

“It infuriates me that we’re living in a time when people are being victimized in this way,” says Cynt. “When this call came, I thought, ‘God is calling me into service.’”

She reports to Cuban who, she says, jokes that he actually will report to her. “In my wildest dreams – and I have had some pretty big dreams and some wild dreams in my life — I never saw this coming,” Cynt said at the press conference introducing her as the new Interim CEO, “receiving a call from the owner of an NBA team with a passionate – and I can’t express that enough – a passionate and heartfelt invitation to contribute to sports and the community in a very unique way.”

The challenge is real. All the values Cynt built her life upon – inclusion, diversity and respect — seemed to be lacking in the Maverick’s previous culture. The issues also hit a personal nerve for Cynt, having lived through and survived domestic violence for years in her childhood home.

But change is in the air. Cynt charges forward with a vision of what The Dallas Mavericks corporate future will look like—“a place of character and integrity where individuals are held accountable for their actions,” Cynt said to the media following her hire. “We’re laying out a vision that says by 2019, the Dallas Mavericks will be the standard. We will be leading the way in inclusion and diversity.”

The Test in Testimony

Cynt’s enthusiasm and unbridled confidence in her ideals have been built through a lifetime of adversity. Climbing to the peak of professional success did not happen because Cynt checked her faith at the door. Her energizing and inspiring leadership style emerged because of, not in spite of, her vibrant faith in Jesus.

Cynt grew up as the fourth of six children, living in a public housing project outside of Oakland, CA. “My mother put two books in my hand at an early age – a math book in one hand and a Bible in the other,” she says.

School was her escape from her tough neighborhood, which was so dangerous that she had to be escorted to school by a uniformed police officer. She witnessed a man shot in the head outside her home at age 11. She endured years of domestic abuse by her father, who abandoned the family when she was 15.

“My father told me that I would be a hooker on the street without him,” Cynt recalls. “I told my sister, ‘That isn’t true. I am going to be the first in this family to graduate from college. I’m going to get Mom out of these projects, and I’m going to be president of something one day.’”

Cynt lived up to her promises. She is a graduate of the University of California at Berkeley, holds two honorary doctorates, and numerous honors and awards for her work in inclusion, diversity and leadership.

Building a Family In Heartache

Despite her corporate success, mountains continued to rise in front of Cynt and challenged her faith, particularly as she and her husband, Kenneth tried to build a family.

“We had four, second-trimester miscarriages. Four. I almost died in all of them and had to deliver each baby.” Their fifth child, Karoline, lived 6 months and then died. “So, at some point, you think, ‘OK, maybe the Lord has another plan,’” Cynt says.

After a 10-year journey, the Marshalls finally adopted three children from the foster care system. A son and two daughters, each had been touched by tragedy and each had struggled to survive. All needed to be “fed from the heart,” Cynt says. Today, the Marshalls’ son, Ken, leads worship with the Aaron Pelsue Band at Mercy Road Church in Carmel, Indiana.

The Marshalls also faced traumatic health struggles. Cynt’s husband, Kenneth, contracted a deadly virus that attacked his brain. “They told me that he may not live, and if he did, he would never walk or talk again, because his brain damage was so severe,” says Cynt. “But I said, ‘Jesus turned the water into wine, made the blind see, and that’s the same God I serve right now. I’m going to get my miracle.’” Cynt left the hospital and her critically ill husband on a Friday and spent a weekend at a church conference to seek the Lord and pray for her miracle. By Monday afternoon Kenneth took his first steps. “I had no doubts,” she says. “Prayer works.”

By the time Kenneth was released from the hospital the doctors said he unbelievably had retained nearly 90% of his cognitive function. “I told the doctors, ‘that is less brain damage than he had when I met him, so that’s just fine,’” quips Cynt.

But the challenges continued. In 2010, Cynt was diagnosed with stage 3 colon cancer. “I just immediately thought about Psalm 91. ‘The Lord is my refuge, my protection. In Him, I will put my trust.’ I told the doctor, ‘You know what, I got three teenagers, with a great big God. I’m going to live, and all of you guys will be a part of this miracle. Let’s rock and roll,’” she says.

Now nearly seven years cancer-free, Cynt confidently professes that she can get through anything with the help of God. “I have evidence that the Lord is real, and he has a plan for my life. We all want a testimony, but we don’t want the test.”


The fact that I have a Savior who is omnipresent, omniscient and omnipotent gives me an extra edge.

Back in Dallas, Cynt is busy pursuing a “March Madness” of her own, meeting with each of the 140 employees of the Dallas Mavericks individually. “Everyone is important and adds value,” she says. “We’re just going back to basics. It’s more than just sensitivity training. We are creating a culture where we truly see the value of having all voices represented. From a spiritual standpoint, it’s just what the Lord requires of us – to be our brother’s keeper and truly love our neighbor as ourselves.”

“The fact that I have a Savior who is omnipresent, omniscient and omnipotent gives me an extra edge,” says Cynt who says she prays about literally every situation. “I don’t go around laying hands on people or forcing them to pray with me,” she adds, but says she prays her way through every situation she is faced with, specifically asking for wisdom and for the guidance to know what to do next. “I’ve been in situations where I didn’t slow down long enough to hear the voice of the Lord or I chose not to listen. I messed up every time. So now at 58-years-old, I have finally figured out how to trust him and let him guide me.”

Belonging to Jesus and serving Him both at work and in the community is core to who Cynt Marshall is. As she tries to lead cultural transformation at the Mavericks and beyond, she sees herself first and foremost as a servant of Christ.

“I am who I am. You can’t tell me I can’t bring Jesus to work. He’s in me. I’m told to be authentic and bring my whole self to work. Part of my authenticity is that I am a Christian. Of course you have to know the rules of your workplace, but you also have to shine a light and stand for something. People are watching.”

“I’ll be in a meeting and tell people that I can’t make this decision right now because I need to pray about it,” says Cynt. “I can’t play a Christian song, but I can sing ‘Amazing Grace’ in the hallway. That’s just who I am. I am truly, truly not ashamed of the gospel of Jesus Christ. I’m not flashy about it, I’m just who I am. People ask me all the time, ‘are you a believer?’ and I don’t know what I’ve said to make them ask, but I just say, ‘oh yes I am, and let’s go out in the parking lot and I’ll tell you all about Him.’”

MEET CYNT
Get a front row seat to Cynt Marshall at The Multiply Conference 2018. Register today at multiply2018.com
Post Views: 0 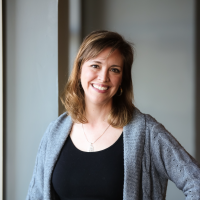