Warning: session_start(): Cannot start session when headers already sent in /homepages/34/d212226560/htdocs/multiplyresources/multiplymagazine/wp-content/themes/grandmagazine/header.php on line 11
 You know about GoFundMe, but have you heard about Todah? – MULTIPLY

You know about GoFundMe, but have you heard about Todah?

Having been in the nonprofit world almost my entire career, the idea of launching a for-profit company was not on my radar. But after 20 years in nonprofit fundraising, the Lord unexpectedly changed my trajectory into for-profit technology. This is not what I envisioned my next step to be, but when I discovered that this “new” fundraising model truly worked, I knew that the Lord had given me this new path to help my peers and the causes they support.

The fundraising platform is called Todah. Todah is the Hebrew word for “thank you.” I chose this name because I believe that thankfulness leads to generosity.

It’s a simple concept, but I believe it is a game changer for nonprofits that are trying to figure out how to survive with the smaller gifts that millennials are spreading over a broader number of organizations. Nonprofits are having to shift the way they think about fundraising because, until now, people have tended to give larger gifts to a few charities. But millennials are different for several reasons. One, they hear about new nonprofits every day. Secondly, they are more likely to support a cause that is important to a friend or family member than one that is not. Finally, they are the generation that has made corporate social impact a “thing,” so they choose products that will give back a portion of their purchase price to a cause. This is all noble and definitely underappreciated, but it has created a challenging cause and effect for nonprofit fundraising.

“[Millennials] are the generation that has made corporate social impact a ‘thing.'”

Todah meets this challenge by guiding people to give in a series. For example, a nonprofit wanting to raise $125,000 would select a series from  $1 – $500 (i.e. $1, $2, $3… $498, $499, $500). Then, their supporters choose any number in that series. We encourage them to be creative and select a number that has some significance to them or their involvement with the particular nonprofit. Furthermore, they can share that story on the Todah campaign page and/or social media to encourage other donors to support the nonprofit.

By simply guiding people to give in a series, small gifts can add up in stunning fashion. The example just presented would help an organization raise $125,250 and no one would have to give more than $500. It truly makes every gift matter, no matter how small. It adds up so much faster and takes fewer people than traditional fundraising or crowdfunding, all while allowing supporters to give out of their unique generosity story.

From the onset of this new endeavor, I had to learn a couple new languages: for-profit start-up language and tech language. In reality, these are not just new languages, but whole new cultures to embrace. I’m in process. It often still feels foreign and awkward to me, but I continue to press in.

I daily depend on the Lord for wisdom and revelation on direction and next steps, so it is always clear to me that He is the one pushing it forward.

“When He gives one of His children something outside of their expertise and comfort zone, He shines most brightly.”

In my own situation, I have to keep stepping out of the way and listen. Starting a company is not for the faint of heart, so I am thankful that I am not in it alone.

The journey to start something new, to break new ground, change old mindsets and to do it all in a world that is completely unfamiliar, is a challenge that has caused me to depend on the Lord more than ever. I am thankful and excited to see what He will continue to do to help grow my faith and trust in Him and to use Todah to further His Kingdom and impact communities.

For more on Todah, go to todahgive.com 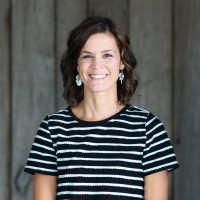