It’s been 16 years since the beloved Mr. Rogers has passed, and he is arguably bigger now than ever. With the recent documentary, Won’t You be my Neighbor, the biography The Good Neighbor: The Life and Works of Fred Rogers and the upcoming biopic starring Tom Hanks “A Beautiful Day in the Neighborhood,” it seems now more than ever, the world is asking us to love our neighbors and we are responding with a resounding “Yes!”

Whether high up on a soapbox sharing political opinions with strangers on the internet, or confused and conflicted by the political and personal division we witness all around us, we can all learn something from the man who showed us how to love when we were preschoolers sitting on our family room floor. As passionate as some of us are about politics and the things that separate us, we are collectively tired. Deep down, behind all the facades, we are—each of us—still there on that floor clinging to Mr. Rogers’ every gently-spoken word of love and acceptance.

Compelled to be different

Fred Rogers has been referred to as an unlikely hero. Even more unlikely is his television stardom, as he was someone who didn’t think highly of the particular medium of communication. He was turned off by the way he felt television was being used as mindless entertainment. A man after God’s heart, he was planning to go to seminary when he decided to pursue television instead, in an effort to make good use of something he saw potential in. He felt people were missing an opportunity to use the form of technology in greater ways. He once said, “love is the root of everything.” He made it his mission to show love on a grand scale, and he decided to start with children.

Rogers, having a tough childhood full of various illnesses, was often left to his imagination. His deep understanding of an uneasy childhood is what urged him to make children his directed audience. As the documentary states, he wanted to help children understand the “deep modulations of life.” He did this by talking about big issues like divorce and death and would often weave in the political climate of the time.

For a man whose primary audience had not yet graduated preschool, he did not shy away from the Vietnam War or the assassination of Bobby Kennedy, making these world events something that children could understand and talk about. He wanted to allow children the means to feel and validate that emotions are okay. He believed that children needed to know that feelings are mentionable and manageable, and he gave them a place to process these big things from the familiarity of his neighborhood.

In a world where black people were not allowed to swim in the same public swimming pool as white people, Rogers pushed the boundary, exemplifying what loving your neighbor looks like. He did this subtly, by inviting Officer Clemmons, a black police officer and regular on his show, to soak his feet in a children’s toy pool with him. There was nothing overtly political about it, yet there was a message of love.

It’s not surprising that his method was love. He was a man of God so deeply rooted in love that ironically, as an adult, he always weighed 143 pounds, the number analogy to “I love you.” That was the magical quality that he held that still baffles people today. The Bible states that God is the embodiment of love and, in a way, Rogers made that his evangelism. A friend of Rogers’, Reverend George Wirth said that“Fred’s theology was ‘love your neighbor and love yourself’and he saw that communication as the most deeply spiritual thing that he could be doing.”

Wirth added more detail in the documentary stating, “There was a whole spiritual dimension to his work in the television business to be inclusive. He did this without ever identifying himself as a minister. He didn’t wear a collar; he wore a sweater. And he preached in that context in a way more effective than anyone I’ve ever seen, because it wasn’t a sermon like an oratorical thing, it was a communication right into their hearts.”

“He did this without ever identifying himself as a minister. He didn’t wear a collar; he wore a sweater…it was communication right into their hearts.” -George Wirth

The theme song even exemplified this notion. Rogers had this to say about it: “Well, I suppose it’s an invitation, won’t you be my neighbor. It’s an invitation for somebody to be close to you. You know, I think everybody longs to be loved and longs to know that he or she is loveable and consequently the greatest thing that we can do is to help somebody know that they are loved and capable of loving.”

“Look for the Helpers”

And when the world got ugly, as it’s not exempt from doing, he even reminded us that there is always hope. “When I was a boy and I would see scary things in the news, my mother would say to me, ‘look for the helpers. You will always find people who are helping.’”

Fred’s wife speculated that if he were still alive today to see the current divide within our nation, he would probably be trying to mend it. Not to say that he was perfect, because even he struggled with the news of 9/11. His coworkers said he had to be pumped up and seemed to have lost hope, but what an amazing testament to his career and influence that he was asked back for a special to specifically address this catastrophe.

Ultimately, Mr. Rogers never forgot how vulnerable it was to be a kid. One of his famous songs on the show was “I Like You As You Are.” The lyrics went like this: “I like you as you are exactly and precisely, I think you turned out nicely and I like you as you are.” He once said of the song, “Children need to hear that. I don’t think that anyone can grow unless he really is accepted exactly as he is.”

Unfortunately, work for the Kingdom is not always easy. Years later, Rogers was blamed for making every child feel special. Harvard Early Childhood Education professor Junlei Lisaidin response to the criticism, “I’m sure by then Fred had heard the criticisms, but it’s not talking about entitlement and if you don’t believe that everyone has inherit value you might as well go against the fundamental notion of Christianity that you are the beloved son or daughter of God.” The professor later added, that Rogers referring to every child as special was “really a matter of believing that you’re endowed by your creator with good.”

Morgan Neville the director of the documentary on Rogers said this when asked what he hopes audiences will take away, “For the million of us who watched him, we learned something from him. If we can reacquaint ourselves with what he was trying to teach us, then maybe we can find…more compassion and kindness in our culture. He never judged people…He was always trying to get beyond judgment to a sense of acceptance and self-acceptance.”

Fred Rogers chose a career in television despite his aversion to it. It was his “mission field.” He knew it was where he would make the most impact. He truly lived his life as Christ-like as any human can. He said that we are called to be repairers of creation and he believed the way to do this was to love one another. Now, more than ever, we can all take a lesson from Mr. Rogers in the art of loving our neighbor. 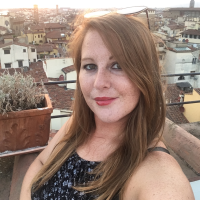 Angela Abbott is a published writer as well as an English teacher.

The joy housed in her heart